The village Černá v Pošumaví is an ideal place for anyone visiting Lipno for its wind sports opportunities such as sailing, windsurfing and kiting because of the perfect location at the widest point of the dam. Černá v Pošumaví is also the ideal spot for winter sports lovers, as the lake freezes first at this part, and you can therefore do some recreational skating but also endurance activities such as Nordic skating. This location is great for ice kiting and snow kiting, and if there is snow lying on the ice, even for cross-country skiing or extreme jogging on the frozen water. 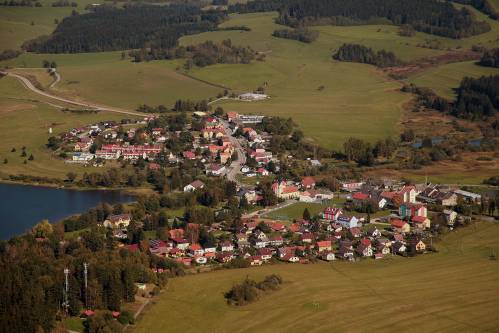 Cyclists and hikers will appreciate the extensive network of trails that intersect the village. Thanks to the ferry at the river Dolní Vltavice the trails connect to cycle paths and hiking trails in Austria. This is the longest ferry route in the Czech Republic, measuring 1100 meters across the water surface, and it can be appreciated by seekers of unusual experiences. Those who enjoy fine arts can also enjoy a trip around the village. Near Černá v Pošumaví there are statues of granite, wood and sandstone by leading world artists. The themes are truly wide-ranging: from fairy-tale creatures, various spontaneous elements to sports themes or abstract art.

The village Černá v Pošumaví also has a cultural background for fans of outdoor movies. The summer cinema surrounded by tall trees has a completely new projection area and the program offers true summer hits to satisfy not only families with children, but also young visitors or real movie experts. When describing the entertainment offered by the summer cinema in Černá v Pošumaví, it is worth mentioning that every Tuesday from 5 pm the cinema belongs primarily to children. However, even adults won´t be bored during the theatre performances.

On hot summer days in Černá v Pošumaví, you will also find a Caribbean spot. The sandy beach called Windy Point is a true embodiment of summer relaxation by the water. Not only beach volleyball, freshly mixed ice drinks, but also a rich animation program form a great plan for the perfect summer holiday.

In the sports centre Kitesport at the campsite Jestřábí you will find a year-round sports school and rental service with sports equipment, so if you do not have your own equipment or just do not want to bring it with you, you will find everything that your active heart desires. From skates, bikes, skikes in spring, sea kayaks, SUPs, pedal boats, surfbikes, sailing boats, catamarans, windsurfs and kites in the summer season. In autumn and winter, you will not be bored here either. Autumn is the ideal time for cycling and landkiting or kite buggying. In winter, you will find skis, skates, Nordic skates, but also a specialty such as blokart with ice blades. You can also try a very unusual sports discipline which is ice sailing.

For adrenaline fans, there is also the Adrenalin Park in Černá v Pošumaví, where you can find in addition to the possibility of playing paintball in the beautiful countryside of the Bohemian Forest (Šumava) also a rope centre in the treetops or even a shooting range for archery.

From a historical point of view, the village Černá v Pošumaví has been a place of interest since the 18th century, when the extraction of graphite begun. The graphite mines themselves were opened by the Schwarzenbergs in 1812. The graphite extracted here was used to make pencils. Most of the mines were flooded by the reservoir, but more north near the Mokrá village, which also falls under Černou v Pošumaví, the portal of Josef's Adit is preserved and it is considered an important technical monument. The only well-preserved Václav mine near the village Bližná is now used as a source of high-quality water. There is also the bottling plant of the splendid Bohemian Forest water – Šumavský Pramen.

Among the sights in Černá v Pošumaví, it is worth mentioning the Church of the Immaculate Conception of the Virgin Mary and the statue of St. John of Nepomuk. The highest set stork nest in the Czech Republic is also located in the village. It is more than 50 years old and regularly occupied by a couple of white storks and their fledglings.